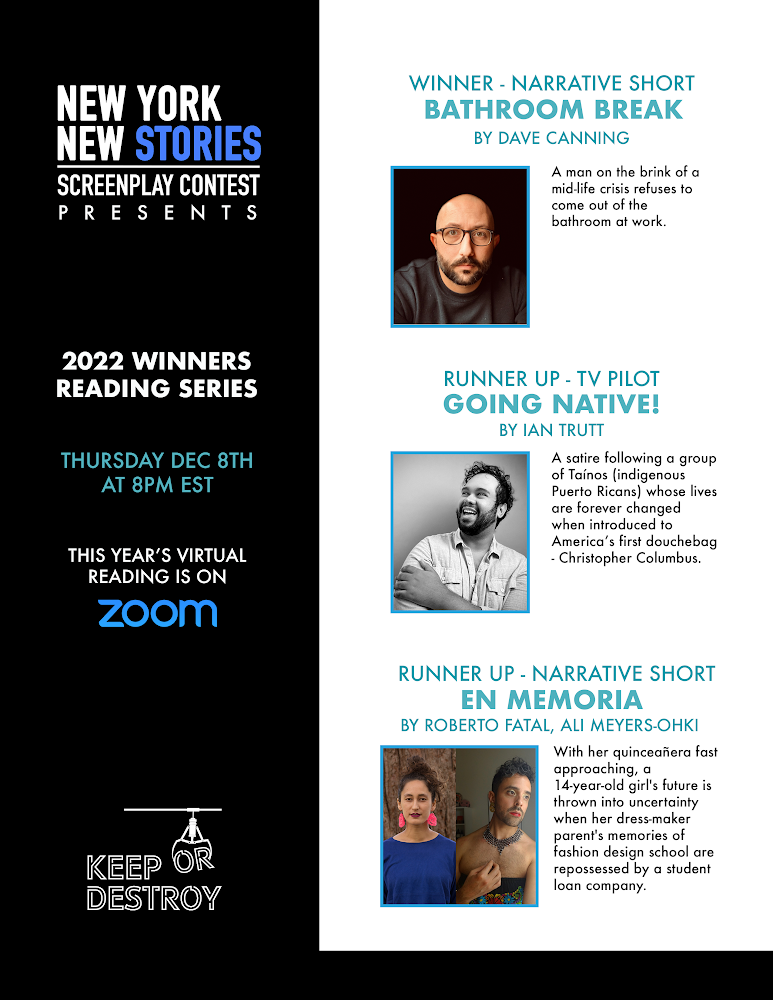 WARNING! NSFW:  Had a great time chatting with Ruan about "Cam Girl," writing, boudoir and more! 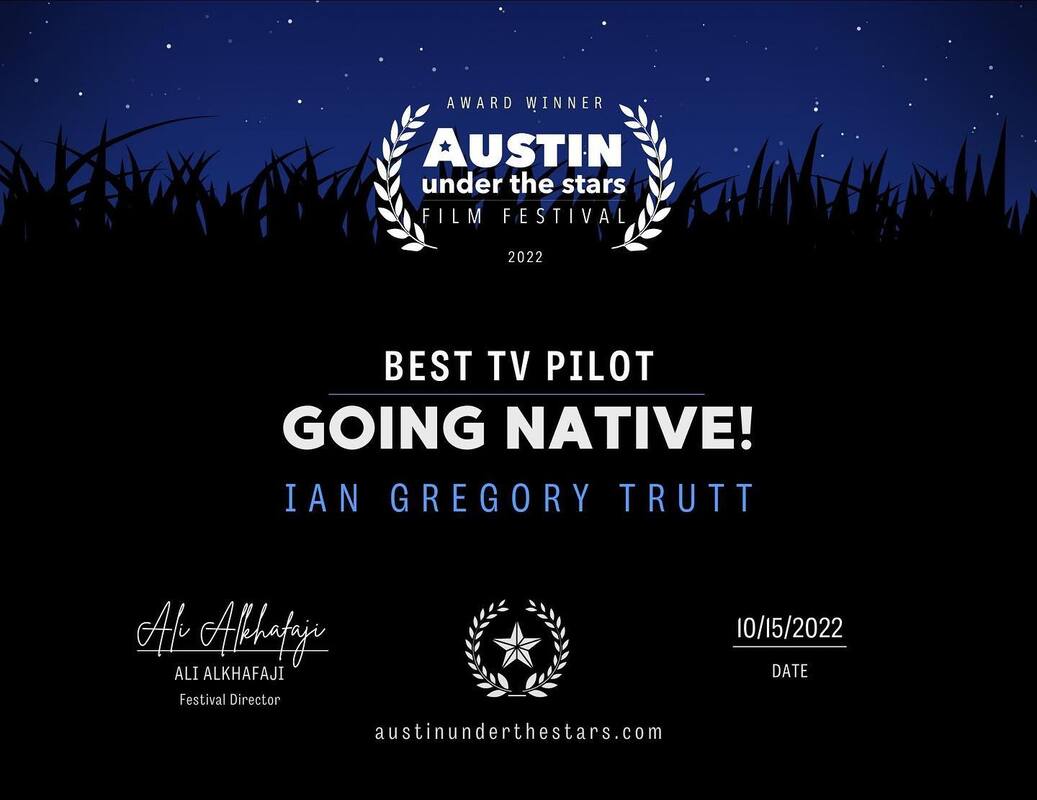 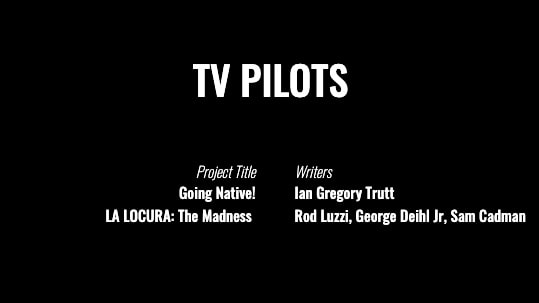 Somebody Write This (Guest)

"A used car dealer moves in with the shady influential owner of a nightclub and his life changes dramatically."
Why do these two move in together? What kind of dramatic changes ensue? And who is Ann Wolfe?
I sit down with Hannah and Jenny to figure out how to make this random plot come to life.

I did this interview, and it turned out none of it recorded. Luckily, these guys are so chill that I didn’t mind doing it again!
These cool fellas have interviewed Emmy winners, SNL writers, and for some reason, me.
Important note:  I think the other episodes just have their standard cover art, so I must be special... or cursed to be immortalized by this photo forever.

Listen to me clumsily explain painful American history to a friendly Canadian man.

1. What is your screenplay about?
“Going Native!” is a dark comedy about the genocide of 90% of the Taíno Indians in Puerto Rico by Christopher Columbus, aka America’s first douchebag.

2. What genres does your screenplay fall under?
Dark comedy, satire

3. Why should this screenplay be made into a movie?
I feel like this would make for a great show because there are years of horrific and hilarious events during this time period. It can sustain itself reasonably for a few seasons while never running out of true events to draw from. It’s also a story that feels timely as we continue to debate Columbus Day and statehood for Puerto Rico.

4. How would you describe this script in two words?
Fucked up.

5. What movie have you seen the most times in your life?
My Cousin Vinny. Probably rewatch that every 4-6 months. It’s a tight script all around, and Marisa Tomei is at her best here.

6. How long have you been working on this screenplay?
Considering a considerable amount had to be done (and is still being done), going from idea to current draft has taken a little over two years.

7. How many stories have you written?
What counts as a story? I have any number of unfinished scripts and plays that may or may not ever see the light of day. I’m currently in post production for a digital series of nine episodes that I wrote.

8. What is your favorite song? (Or, what song have you listened to the most times in your life?)
That’s the sort of thing that depends on when and where I am. I have a summer playlist, driving playlist, summer driving playlist… regardless, every playlist has at least one Taylor Swift song.

9. What obstacles did you face to finish this screenplay?
When people argue that keeping a Columbus statue up is “preserving history” while you’re literally writing about him being a genocidal monster… it can be distracting and really makes your blood boil.

10. Apart from writing, what else are you passionate about?
My wife says I should say it’s her, and that’s definitely true. But also, she and I are both avid gamers. I’m a sucker for narrative in all forms and happily consume story rich games (shoutout to PlayStation Studios).

11. You entered your screenplay via FilmFreeway. What has been your experiences working with the submission platform site?
So far, so good. I had one issue where a festival would not notify me for many weeks after the deadline, and FF kindly reached out to them on my behalf.

12. What influenced you to enter the festival? What were your feelings on the initial feedback you received?
Sometimes you just get a good vibe reading from festival descriptions, and it definitely rang true in this case. I was very happy with my feedback, which was comprehensive, personable, and very kind.
Read it in full here.

What’s your name? Where were you born? Where do you live? And what’s your hobby?
Ian Gregory Trutt. Born in Decatur, GA, and currently residing in Marietta. Theatre and film are hobbies that I’d like to turn into full-time work. Moreover, I also enjoy music and sound design.

Where did you come up with the concept that just placed as Finalist in the screenplay contest? How long did it take you to develop it into the screenplay it is now?
I was inspired by my Puerto Rican heritage and the ongoing debates around the renaming of Columbus Day to Indigenous Peoples Day.

From concept to finished draft, can you take us through your screenwriting process?
In this case, I was able to pen a few lines of dialogue and finish with character development, then dove into extensive research. It was important to me that the story be rooted in some historical accuracy even while introducing comedic and modern elements.

When did you realize that you wanted to become a screenwriter?
I can’t remember a time when I didn’t want to write screenplay outlines.

Who are your biggest filmmaking/screenwriting influences? What about their style do you like or borrow?
Edgar Wright for his use of sound and storytelling in the edit. The Coen Brothers for comedy beats and composition. Tina Fey for dialogue.

Have you ever been obsessed with a movie or TV show? If so, which one? Why?
Most recently, “She-Ra and the Princesses of Power” and the acclaimed “The Haunting of Hill House” both struck me, the earlier with its complex and unforgettable characters and the later for its impeccable use of structure and long takes.

What’s your favorite moment in cinema history? Why?
It’s not necessarily the best shot or profound moment in cinema, but “A Knight’s Tale” is one of the only movies that can make me laugh constantly then make me cry every single time William goes home to see his dad.
Strong runner up: the last courtroom scene from “My Cousin Vinny.” My fianceé and I can quote this entire scene word by word.

Who’s your favorite character in cinema history? Why?
This is impossible to answer for me, but the most recent character to completely captivate me would have to be Catra from “She-Ra.” Noelle Stevenson takes what looks like a kids’ show and provides an unflinching look at childhood friendships, love, and shared trauma that has kept me watching video essays on Catra and this show for months.
​
If you could talk to anyone from any era, who would it be and what would you ask them?
If I could make a pit stop on my way through time, though, I’d go punch Christopher Columbus in the face before having lunch with someone like Da Vinci or Socrates.
Read it in full here.

If you like my work, please consider making a contribution. If you'd like to be involved in acting, design, logistics, or more, please share your interests here.